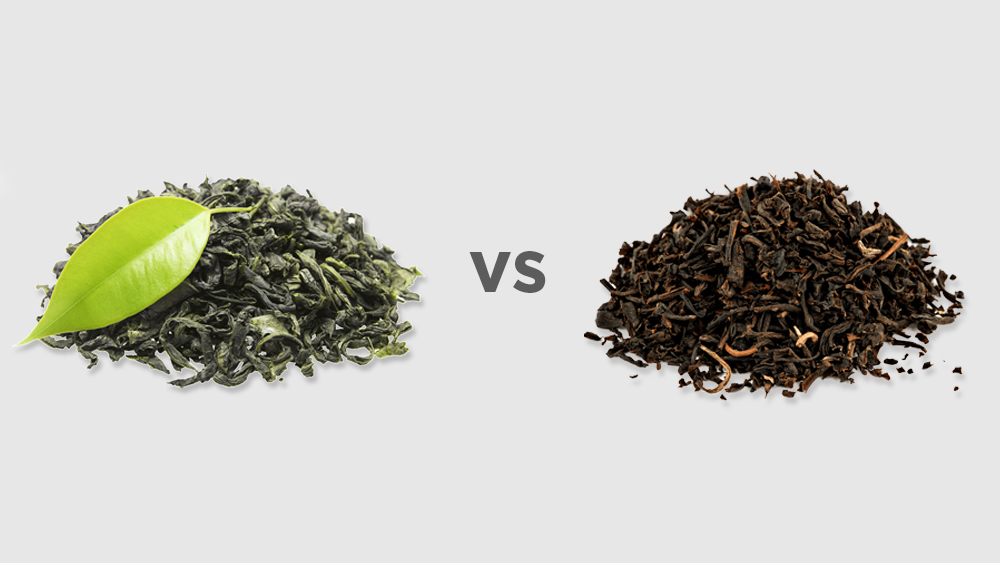 Did you know that tea is the most widely consumed drink in the world? Packed with tons of health benefits, this beverage has always been a delicious staple with staying power. While it is true that all tea comes from the same plant, this does not necessarily mean that all tea is fundamentally the same. Join us as we take a closer look at the two most popular tea varietals: green tea and black tea.

What is Green Tea?

Green tea is a varietal of tea that is made from unoxidized leaves of the Camilla Sinensis plant. When eastern cultures talk about tea, they are generally referring to green teas, such as Matcha green tea, Sencha green tea, or Jasmine green tea. This type of tea is most commonly consumed in China and Japan, as a daily source of antioxidants during meals.

Like most teas, green tea stems from the Camilla Sinensis plant. When the tea leaves are ready for harvest, it is minimally oxidized to keep its fresh-picked, bright green color and light, vegetal flavor. Compared to black tea, green tea has less caffeine with about 20 to 40 mg of caffeine per 8-ounce cup.


Among all teas, green tea originated in China. One popular legend suggests that Shennong, the Emperor of China and supposed inventor of Chinese medicine, discovered tea around 2700 BC when a fresh tea leaf from a nearby tree fell into his cup of boiled water.


Over time, green tea has drastically grown in popularity. Notably, China and Japan dominate the market in the production of green tea. The four most popular types of green tea are Sencha, Matcha, Jasmine, and Longjing (or “Dragon Well”).

What is Black Tea?

Black tea is a varietal of tea that is made from oxidized leaves of the Camilla Sinensis plant. When western cultures talk about tea, they are often referring to black teas, such as sweet iced tea, English breakfast tea, or Earl Grey tea. This popular type of tea is known for its strong, robust flavor that can shine through lots of sweeteners, creams, and other ingredients.

Similar to green tea, black tea grows from the Camilla Sinensis plant; however, the oxidation process that it undergoes after being harvested differentiates it from other varietals. The oxidation process consists of a series of chemical reactions that brown the tea leaf, which affect the tea’s taste, aroma, and chemical compounds. Sometimes referred to as fermentation, oxidation creates a bold malty, smoky, or fruity flavor depending on the intended tea type. In addition, this process also increases the natural caffeine content found in tea, resulting in 40 to 70 mg of caffeine per 8-ounce cup.

Prior to the mid-17th century, all tea in China was green tea. Due to the increase of foreign trade, Chinese growers needed a way to preserve their tea during their long travels. They found that oxidizing the tea leaves would help retain its freshness and flavor over a longer period. Thus, the introduction of black tea.

Today, black tea is grown and produced all over the world across various geographic locations and climates. The four most popular types of black tea are Keemun, Assam, Darjeeling, and Ceylon.